The future of SFNS in the EU will depend on the development of contextual variables such as economic growth and climatic change, and on the responses of the agro-food system through innovation and policies.

The foresight will rely on the new SUSFANS modeling toolbox, consisting of short-term and long-term economic models to provide quantitative projections of indicators defining the sustainability of the EU food system. The quantitative information will be complemented by qualitative narratives derived from the scenarios reviewed by SUSFANS stakeholders.

In their new deliverable, the researchers presented a first step in the quantitative part of the foresight. Its main objective is to quantify the contextual variables to be used as input by models in the SUSFANS Toolbox.

The foresight has been deliberately designed to focus on solutions in terms of (a) innovation pathways, elaborated in the case study supply chains of livestock-fish and fruits-vegetables; and (b) agro-food-nutrition policies. From this perspective, the contextual scenarios are rather a mean to the foresight than its final outcome.

Quantitative foresight on food security has been expanding rapidly. It was decided to build on existing narratives and quantified scenario drivers rather than to develop a completely new set of contextual scenarios.

A literature review of existing scenarios, and participatory analysis with the SUSFANS stakeholder core group, resulted in two decisions:

Three contextual scenarios were selected for quantification. From the policy making perspective, it seemed important to develop a business as usual baseline, REF0, representing the reference scenario with respect to which innovation pathways and policies can be tested. In order to test the robustness of the developed solutions with respect to less favourable socio-economic developments, a scenario representing high challenges for EU sustainable FNS was implemented, REF-. Finally, to take into account too the potential alternative of a highly positive development in socio-economic parameters and their capacity to contribute to solve sustainable FNS issues in the EU, a contextual scenario representing low challenges for the EU FNS, REF+, was also applied. 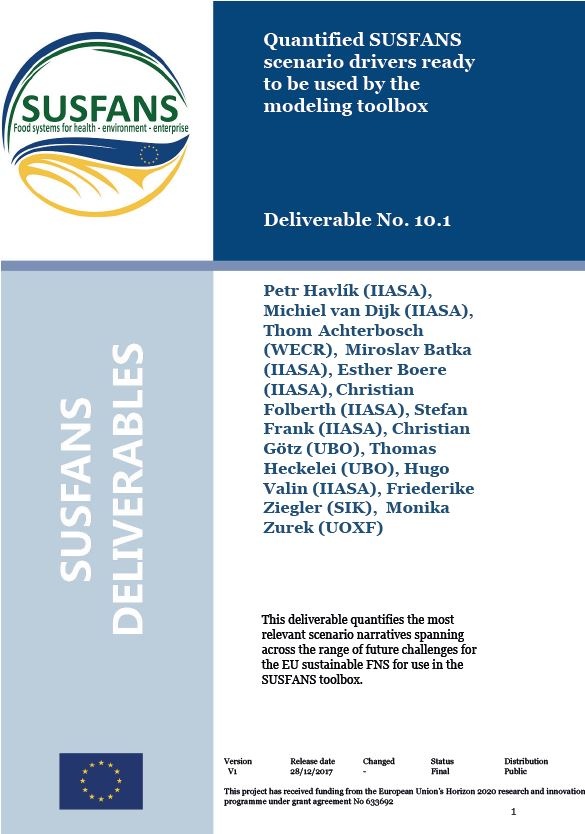